A popular electronic music artist has decided to step behind the curtain and release his first full length album under the alias ANGRY MUFFIN.

Angry Muffin, who as his former personality released music with some of the top electronic labels on the planet, says shielding himself from the public and media will force audiences to listen rather than look. The anonymous artist plans on captivating his followers through music without a public image, hearkening back to a time when glitz and a pretty face were not as important as the music itself. The album’s opener You Crushed Me sets the tone with relentlessly crushing beats and a solemn Muffin voice. Poison In My Brain steps the tempo up a notch with a sparse, groovy backbeat and an ultra infectious vocoded vocal. A catchy bass riff and a wild, Moroder-esque arpeggio – culminating in a dramatic operatic finale – are the ingredients of the futuristic disco anthem Flipped Out. With I Saw The Demon, Muffin unleashes the rage with an industrial beat, growling synths and a dazzlingly memorable guitar solo. On the seven track album, Angry Muffin collaborates with the talented yet emotionally volatile Firesnake, as well as the beautiful and gifted vocal powerhouse, Victoria Gydov.

To further compliment his new found anonymity, Angry Muffin promises a revamped live show unlike any other electronic act, complete with Andy Warhol inspired backdrops and fully produced live installations. Performances by popular guest musicians, including Angry Muffin himself will round out what promises to be the most talked about live act from Canada. Angry Muffin’s self-titled debut album is out now on Alpha Milk Recordings and available on every major download portal.

For more information about the Angry Muffin album contact Wilf Libgott of http://www.hammarica.com

Angry muffin was baked in 1982, in the city of Halifax, Nova Scotia. The son of a pastry chef and a guitar playing prostitute, he developed an inclination toward music and the opposite sex at a very early age. It seems his desire to hear new music – accompanied with pictures of sexy, naked women – was completely insatiable. His mother, whose nose was always covered in her husbands finest baking flour, exposed him to the raging sounds of classic rock, hair metal, early thrash, synth pop, and uh, regular pop.

In the early 90s he moved to the nation’s friendliest and most outgoing city: Toronto. This is where the young Angry Muffin was seduced by the cities burgeoning rave scene. The outrageously gorgeous little girls and their glowsticks made him very happy and excited, and he just needed to be a part of it all. Unfortunately, he had troubles integrating into the social scene due to various prejudices, so decided to take up music production to earn their respect. He was immediately praised for his talent by all of his peers, and some DJs even played his music in front of thousands of dangerously dehydrated children!

Soon thereafter the young Angry Muffin fell in love with a young, tiny breasted raver girl named Chelsea. At first it seemed like a match made in muffin heaven, but Chelsea eventually left him for a regular human man with a penis. Devastated, Angry Muffin decided never to make music again…and never to trust another woman with his heart for as long as he lived.

In the years following the heartbreak, Angry Muffin spent most of his time drinking large quantities of alcohol and getting kicked out of the bars of Toronto. Unable to defend himself due to his small stature, the young muffin was sodomized on numerous occasions. To cope with the humiliation and physical pain, Angry Muffin became addicted to heroin, crack cocaine, regular cocaine, morphine, opium, horse tranquilizer, LSD, methamphetamine, GHB, Oxycontin, PCP, nutmeg, and allspice. These were very dark times for Angry Muffin.

However, in 2012 – and much to the fanatical joy of the electronic music world – Angry Muffin decided to lift himself up from the depths of his despair and once again make music. In this music, Angry Muffin draws from his deepest feelings, which include isolation induced depression, euphoria, confusion, anger, paranoia, despair, emptiness and desperate longing. Sometimes Angry Muffin is happy so he makes a happy song.

Angry Muffin’s long awaited first work is self titled, and available now at all the world’s most popular online music shops. 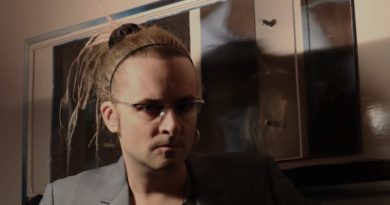 March 12, 2020 Soundcloudplaylist.com Comments Off on LUCA DRACCAR STRETCHES THE BORDERS OF IMAGINATION AND TECHNO